UK Van Business Franchises with Sole-Operator and Management Opportunities
All Franchise Categories  »  Van-based Oven and Kitchen Cleaning Franchises  »  Ovenu  »  Casestudies
Ovenu Case Study
Ovenu Yeovil is gearing up for continued growth after a successful 10 years in business. Martin McNeill, owner of Ovenu Yeovil, previously averaged 15 oven valets a week before taking on Andrew Burden to support the business, which has seen this number rise to 25 a week.

A Yeovil-based oven valeting firm is gearing up for continued growth after a successful 10 years in business. 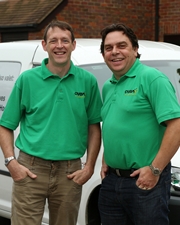 Ovenu Yeovil has now amassed more than 10,000 oven valets since it was established in June 2006, with year-on-year growth in the last two years following the appointment of a sub-contractor.

Martin McNeill, owner of Ovenu Yeovil, previously averaged 15 oven valets a week before taking on Andrew Burden to support the business, which has seen this number rise to 25 a week. More than 70% of Ovenu Yeovil’s business activity comes by way of recommendations and repeat custom.
Martin, 46, now plans to add to his workforce in the next couple of years to support the firm’s growth.

Martin said:
"It has been a fantastic 10 years in business and more than what I could ever have expected. Andrew coming on board has really accelerated the growth of the firm and we are now on course for continued success, as a result. Hopefully, within the next two years, I will be in a position to take on another sub-contractor and expand the business even further.

Despite operating during the recession, which crippled consumer confidence and many businesses, it was actually my busiest time! Demand during one of the month’s in 2008 was so busy that I am yet to beat it, and from that period onwards, the business has gone from strength to strength.

I would like to thank my loyal customer base for all of their support over the past 10 years and I am looking forward to celebrating further milestones in the future."

Ovenu Yeovil delivers its environmentally-friendly oven valeting service to homes and estate agents throughout Yeovil, including the surrounding towns and villages, as well as the entire West Wiltshire area.

Ovenu is a franchise network made up of more than 100 businesses owned by men and women working throughout the UK.

Rik Hellewell, Managing Director and Founder of Ovenu, said:
"Martin is a model Ovenu franchisee and I am delighted that he has built-up such a successful small business over the past decade. He has worked extremely hard and reaped the rewards with continued growth and a growing customer base. I would like to wish him and Andrew all the very best."

The Ovenu valeting process involves dismantling key components of an oven such as the door, interior panels, fan and shelves and placing them into design-registered tank equipment, which uses safe, non-caustic products to clean the oven parts. The whole process takes around three to four hours and leaves the oven, hob and exterior in immaculate condition.

Find out more about Ovenu franchise opportunities by clicking below

Jackie Meredith, a former market researcher with a zest for life and an appetite for adventure, is launching her oven valeting business in Codsall.

Dave Manning has swapped his 30 year career at a garden centre to start out in business as owner of Ovenu Bristol East.

Stephanie Horsfall has rolled up her sleeves to start out in business as an Ovenu franchise owner in Halifax.

Darren Hayter, the owner of Ovenu Ware, has realised his ambition to become his own boss.

Ritchie Landels has swapped the North Sea for the kitchen after launching his Ovenu business in Kirkcaldy.

Anna Mason, 45, from Yoxall, near Burton-on-Trent, chose Ovenu after looking at a variety of franchise opportunities.