Over 150 Revive! franchisees and technicians gathered at the home of England football, St James Park, to attend the company’s 15th annual conference and celebrated a year which saw an almost 50% increase in demand for the UK’s leading network of accredited SMART repairers.

The theme of this year’s conference was ‘Mindset for Growth’.  Board directors  Mark Llewellyn, Terry Mullen, Cathryn Hayes and Kelly Blackmore-Lee  presented the highlights of the year which included a 14% growth in network sales,  £1.5m worth of additional work from national account customers, six new franchisees and outstanding customer feedback through Trustpilot. Over 40% of franchisees achieved best ever months during 2018.

"What a  difference a year makes. This time last year we had snow and cancellations and difficulties at the start of the year due to the Beast from the East. But  just a  year on we have had  a fantastic start to 2019 with work pouring in and the mild weather allowing us to fulfil the work.

At the same time I can’t believe 15 years has gone by so quickly, but time and evolution are relentless and one of our challenges is to make the most of the time we have. It is no surprise to me that the business is not the same business it was 15 years ago. We have moved from the traditional  ‘man in a van’ model to being a network of thriving businesses running multiple vans and employing technicians.

Well done to those running businesses – you should be rightly proud of yourselves. We are on track to achieve our ambitious goal of reaching a £20m turnover by 2020 and have a very exciting year ahead of us."

The company now has 60  franchisees,  with 181 technicians on the road, all supported by a 50-people strong Rugby based head office team.

Delegates heard from an impressive line-up of speakers drawn from the automotive industry and the field of sport.

David Cresswell, chairman of the ABP Club spoke on the changing face of the bodyshop industry and the increasing role SMART repair has to play in this new environment, whilst Steve Plunkett, Volvo’s body and paint programme development manager spoke about his company’s long heritage of safety.  Volvo’s 2020 vision is that nobody shall be seriously injured or killed in a new Volvo and he underlined the importance of choosing the correct repair method in this. 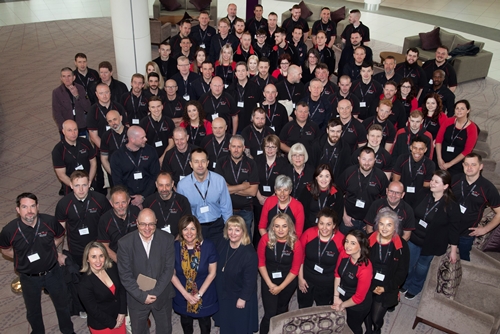 A supplier showcase was held after lunch and a question and answer session with Revive! sponsored BTCC racing driver Andrew Jordan brought the conference to a close. He shared his  team’s plans for the 2019/20 season and donated a special BTCC limited edition Scalextric set featuring his Revive! sponsored BMW as a prize for the evening fundraiser which raised £1,200 for the Motor Neurone Disease Association.

Outstanding individual and team achievements were recognised at the post-conference gala dinner and awards ceremony.

Find out more about franchising with Revive! by clicking below

Revive! has been awarded Investors in People Gold Accreditation following the company’s recent IIP re- assessment.

#Business #Resale of the Day: #OSCAR #Pet #Foods #Franchise @OscarsFranchise in the #Norfolk Broads for £16,000 - t.co/C9BAu4hfzv