Richard, 48, who has lived in Whitley Bay all his adult life, is married to Michelle and has two children. 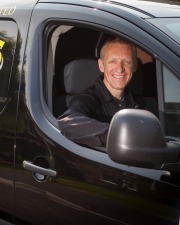 A degree in Housing Studies led Richard to a career working in Housing Management with for Homes for Northumberland, where his responsibilities ranged from allocating properties to overseeing maintenance and estate security, through to grass cutting and rent collection. He took voluntary redundancy from his last post, meaning he was able to dove-tail his exit from one business and entry into Wilkins with no interruption or down time.

In a totally new direction, Richard now owns Wilkins Chimney Sweep – North Tyneside, and will be sweeping chimneys, log burners, solid fuel stoves, Agas, Rayburns and Jetmasters and removing nests and fitting cages caps and cowls to homes and pubs throughout the North Tyneside, Newcastle and the surrounding areas.

Although Richard had no experience of sweeping chimneys, (as the franchisor prefers) he was keen on DIY, having renovated a few of his own rental properties over the years, a key attribute for anyone looking to become a successful Wilkins Chimney sweep.

Richard researched his purchase thoroughly, speaking not only to franchisors Louise and Peter Harris but also to current franchisees, asking them about the job, the training and crucially, the profitability and sustainability of the business model. Richard admits he was so sold on the business he didn’t look at any more franchises, knowing immediately that he had found the perfect vehicle to get him out of the office and into running his own business for the very first time.

Of his new career Richard says,

"I’m so excited to start my new business. I’ve been tied to a desk for so many years that I knew I wanted to do something totally different and being a chimney sweep is certainly that!

I’ve only been working for a couple of weeks now but business is going really well; on my very first day a guy followed me down the road in his car; I was rather taken aback until I realised he wanted to book me as a sweep! I’ve also had some articles in the local papers, organised by the franchisor’s PR agency and I’ve even been interviewed on BBC Look North, both of which have given me sweeping jobs and some possible joint ventures with local firms. One thing I didn’t expect was the huge amount of old friends, way back to my school days, who have seen me in the paper and got in touch for me to sweep their chimneys. I think it really helps that they know and trust me and hopefully they’ll tell all their friends about me too! Yes, life is good; I’m very excited about the future."