Ian Keddie, owner of Oven Wizards Dartford, joined the network back in July 2005 and he has renewed his Franchise Agreement for a further five years. 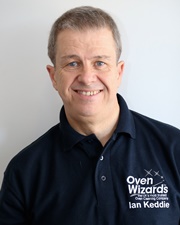 The reason I chose Oven Wizards was that it was a flexible Franchise. There is a flat monthly fee and I don’t have to purchase all my products from their suppliers.

Why have you renewed your Oven Wizards contract for a further 5 years?

When I first started the initial training wasn’t very good. Since that time John and Mark, owners of Oven Wizards, have improved the training significantly. I have personally trained a large number of the new starters myself. On-going support is excellent now, a mix of face to face, phone and e mail. The biggest challenge I had, back in 2005, was to build an initial client base. This has now changed with all the new developments John and Mark have brought in which includes press coverage, supermarket launches and a strong internet presence.

Are you achieving what you expected to achieve?

Yes, most definitely, I now have two vans on the road and we are normally fully booked each week. I am regularly booked up two weeks in advance.

Make sure you research the Franchise market, speak to the franchisor and as many Franchisees as possible.

Mark Abbott, Managing Director and business owner of Oven Wizards said:
"It is great to see that Ian has renewed his agreement for a further 5 years. He is a valuable member of our franchise community. Whilst building his own successful multi van oven cleaning business, under the Oven Wizards brand name, he has also made a positive contribution by helping other Oven Wizards Franchisees, including delivering initial training for them".

Mark went on to say:
"We are really pleased that someone like Ian has chosen to renew, at the end of this term he will have been with us for 15 years. It underlines the great overall package we are delivering to our Franchisees, including our hands on support".

Stephen Leaver loves working for himself and meeting lots of people.

David Tomlinson loves the flexibility of his Oven Wizards franchise in Tynedale & Newcastle and appreciates the excellent support.

Local outdoor enthusiast, Larry Lasenby, is all set to clean up in Bracknell, Wokingham and surrounding areas with Oven Wizards.

Paul Joyce is all set to clean up in Leighton Buzzard, Dunstable and surrounding areas

Paul Joyce is launching his own Oven Cleaning Business as part of Oven Wizards in Leighton Buzzard, Dunstable and surrounding areas.

My supermarket launch went really well. I am now looking forward to delivering the service to all my new customers I have booked in.Gary Taylor, North Devon Franchisee

The Business Builder training was very informative and has given me lots of ideas for marketing and advertising my Oven Wizards business… I am thoroughly enjoying all aspects of running my own business.Kevin Brown, Colchester Franchisee

I joined Oven Wizards as a Franchisee in 2004 aged just 19, having been employed as a Supermarket Retail Manager. I invested in the Franchise and was so impressed with the company that I bought another van. My future looks brilliant!James Booker, Maidstone Franchisee

Hands on support of the business owners from day one

Best value for money oven cleaning Franchise in the market