Martin Lawton is putting his experience in life safety at Heathrow Airport to use as he takes the reigns at Jackson Fire & Security’s expansion in Kingston-upon-Thames. 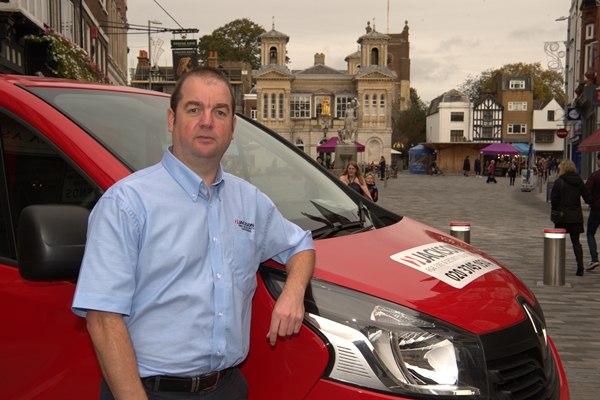 The establishment of the new franchise is the company’s first location in the greater London area, having already launched franchisees in Cambridge and Surrey alongside its franchisees in the north west, North Wales and Cheshire, Yorkshire, Teesside and the midlands.

Martin – who has also worked on major sports stadiums including the Emirates Stadium – is looking forward to putting his more than two decades of experience in safety and security to work in his new venture.

“I’ve worked for large companies and worked in building services for the last 20 years. In the last two years I’ve been involved in fire alarm and life safety systems looking after localised safety within the commercial and public sectors.

I’ve worked for social housing and been involved in stadiums, including the Emirates Stadium, as well as working at Heathrow as a contractor looking after life safety then directly as an asset manager. I also have looked after various bespoke fire and security contracts across London and the south east so safety and security has been in my background across all different sectors.”

A Londoner for more than 40 years, Martin said he was keen to build on the strong reputation Jackson Fire & Security has built elsewhere and deliver quality service for the London area.

“The main thing for me is providing good customer service as I believe the industry should and it is about delivering what the customer expects. It would have been too much for me to branch out alone but Jackson Fire & Security has a good record and the franchise seemed appealing to me as an opportunity.”

Jackson Fire & Security employs over 50 people across its branches in North Wales and Cheshire, the North West, the Midlands, Teesside, Yorkshire and Surrey.

Formed in 1991, the company has built a reputation for quality, reliability and service and is NSI gold-accredited for fire and security systems.

Kris launched the Leeds franchise in September 2016 having previously worked in the yachting industry as a chief officer responsible for fire safety and security.

Jackson Fire & Security have developed a strong franchise network in the North West and the franchisees benefit from sharing technical support with each other and also labour support for larger projects.Gary Johnson, Bolton Franchisee

I believe the main benefit of being a Jackson franchisee is the professional website we have behind us, it allows customers to contact us in a professional manner and get all the information they need before they pick up the phone.Kris Milner, Leeds Franchisee

I like the flexibility and variety that comes with the work and I like knowing I have the support of a well-established company who have an excellent professional reputation.Lee Fowler, Wirral Franchisee