Kris McLernon (33) owner of the Lanarkshire franchise of Wilkins Chimney Sweep, has made the finals of the 2022 Scottish Ex-Forces in Business Awards, in the New Service Leaver category.

The awards highlight the achievements of ex-military personnel, their success since leaving the forces and the organisations that have supported them.

The New Service Leaver category recognises men and women who left the military less than three years ago and are already achieving great things in a second career.

Kris left the army in April 2020 after 14 years as a recovery mechanic with the Royal Electrical and Mechanical Engineers.

In August 2021 he bought his local Wilkins Chimney Sweep franchise, using a ‘no money down’ special offer, intended to help people looking for new careers during the pandemic.

Operations manager Richard Bryan who trained Kris said:
“I knew he was going to be good from the very start of training. Kris is organised focussed and disciplined. He picked it all up very quickly. He regularly uses our company WhatsApp group, picking the brains of the other franchisees, who have been running their own businesses and sweeping chimneys for many years.”

Franchise manager Lisa Kimber said:
“After just six months, Kris is doing an incredible job, far in front of where we would expect him to be at this stage.  He is very independent, continually coming up with new ideas to market and advertise his business. He thinks for himself but always checks with head office first, which is great. Kris is very driven and his customers really rate him. It usually takes a while for a sweep to get word of mouth referrals but just six months in and he is receiving them regularly, a huge testimonial to the service he provides.”

Determination and drive are what make Kris so good; he isn’t satisfied with just doing a ‘good job’, he is ambitious and wants to be the best. We have 17 other franchisees, many of whom have been sweeping chimneys and running their franchises for years and he is already ahead of half of them on our leaderboard. He is one of the most impressive franchisees we have ever seen and we’re sure his military background is partly responsible for that success. We are absolutely thrilled Kris has reached the finals of the awards and we wish him all the luck in the world, he thoroughly deserves it.” 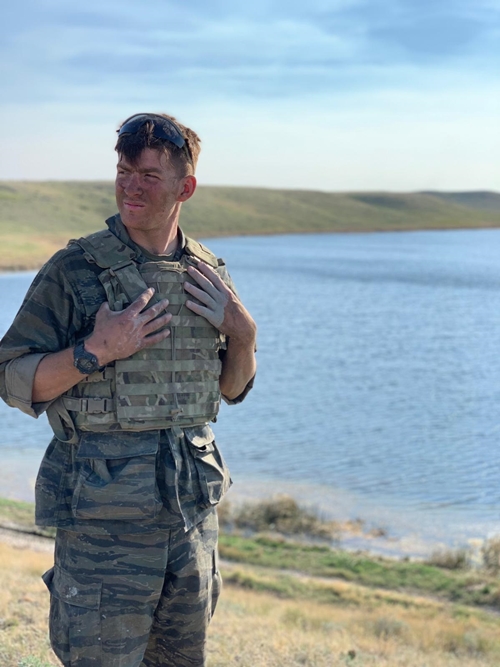 Looking back on his military career Kris said:
“I loved my time in the army but decided to leave during the pandemic; everyone advised me against it but, I listened to my gut and made the move. I did a few driving jobs initially, then I found Wilkins Chimney Sweep.”

Talking about the franchising sector Kris said:
“I think people misunderstand franchising – although the company trained me to do the job and they are on hand if I have any questions, it is 100% me out there every day, sweeping chimneys, fitting cages, getting sooty then going home to work on social media posts and advertising campaigns.  I haven’t bought myself a job, I’ve invested in a brand with a great reputation, an existing presence on the internet, a large network of other franchisees and an experienced franchisor to ask advice from, but the success of my business is entirely down to me. As the saying goes, I’m in business for myself but not by myself.”

Unlike a regular 9-5 job, when you run your own business, you never switch off, but equally I have so much more flexibility in my life. If I want some time off to be with my daughter or attend a special event, I can, that is a major plus point for me; my diary and my day are my own. I would thoroughly recommend anyone who is leaving the forces to consider a Wilkins Chimney Sweep franchise.”

Corp Colonel, Colonel Jason Phillips ADC REME said:
“It’s fantastic to see Kris achieve so much since leaving the REME and in such quick time.  He is clearly a determined, dynamic and proactive individual.  We are proud that our Corps has been an important part of his journey and proud to see him reach the finals of the Scottish Ex-Forces in Business Awards. Best of luck in the final Kris, be sure to keep us informed of your successes.”

Pip Wilkins, CEO of the British Franchise Association said:
“The BFA is extremely proud of this new franchisee and all the hard work he has put in to becoming a nominated finalist in this leading category. He is really showing what can be achieved by using a military background in precision and applying it to owning his own business.  He’s an excellent example of someone coming from the military and using this applied learning to successfully start their own business.”

Find out more about starting your own Wilkins Chimney Sweep Franchise by clicking below now!