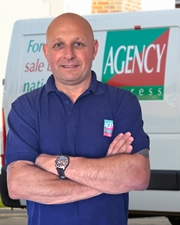 The drive behind his career change was one of wanting to not only run his own business, but to also to maximise his potential to earn a good living.

With a driving history where manual labour was part of the daily requirement Phil found that the Agency Express van based franchise was the perfect business for him to invest in. So, after much investigation in to the franchise Phil contacted Agency Express via the British Franchise Association website.

"I felt confident throughout the early days of starting my franchise. The Agency Express training and support programme gave me the kick start I needed in getting out there and getting active."

Throughout the ten years that Phil has been in business he has not only provided excellent services that his customers can rely on, he has continually focused on building strong relations. He has spent time with his estate agency customers, secured loyal friendships and gained countless new clients.

"I have great relationships with my customers, I spend time with them socially take them out to show thanks for their business. I think is important to take the time out to get to know who you are working for because that’s what sets you aside from the next man."

"The biggest highlight has been making the business a success! My advice to new franchisees would be work at it, always be polite and just get stuck in."

Today Phil Harrington is one of Agency Express’s most successful franchisees and in 2017 he is set to renew is franchise agreement for a further 10 years.

To find out more about Agency Express just click below

The support is still fantastic and you are never left alone when you need help. There is always someone on the other end of the phone to assist with whatever the problem may be. Agency Express staff are more like friends and family that you can just ring for a chat and that is a rare benefit other companies do not have.Danny James, Agency Express Teesside

I was filled with confidence from the professional way my enquiries were dealt with by the Agency Express Team. The strength of the franchise package, the impressive growth of the business in the last 12 years and over 100 franchisees proves that the model clearly works.Martin Shuker, Agency Express Lancaster