UK Van Business Franchises with Sole-Operator and Management Opportunities
All Franchise Categories  »  Property Services Franchises  »  Agency Express  »  Casestudies
Agency Express Case Study
Steve Macqueen runs his Agency Express franchise in Yeovil and Dorchester. Less than a year from inception Steve has established a solid base of customers and continues to grow his business.

Steve Macqueen became an Agency Express franchisee in January 2017. After spending a number of years in sales for the food and catering industry, Steve was ready for a change of direction and set his sights on owning a business. 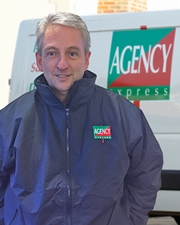 Steve began his journey at the 2016 National Franchise Exhibition in Birmingham, where he approached Agency Express looking for his ideal business. After spending time researching the industry and carefully considering his option’s, Steve decided that the Agency Express franchise opportunity met all his requirements.

"I wanted a simple to operate, task orientated franchise and the Agency Express model provided that. However, it was the ongoing back up from head office that really appealed to me, specifically the ongoing support with accounts and credit control."

After successfully completing a comprehensive five day training course at head office, Steve he was assisted in the launch of his new business. This included a three day programme of visits to estate agencies in his local area enabling him to make first contact with potential customers.Steve excelled in this area and thrived on meeting people and forging new relationships.

"The Agency Express training process is very good. All aspects are covered thoroughly. There was a lot take in but the backup from head office and other franchisees is fantastic, so I felt supported every step of the way."

Less than a year from inception Steve has established a solid base of customers and continues to grow his business. His patient approach in acquiring new business and high standards of service have played fundamental part in his success.

"Building my business was slow to begin with but that has now started to come in nicely. The upside of gradually building the business is that I’ve had the chance to adapt the way I work whilst getting progressively busier. Now I really get a buzz when I sign a new customer."

Get the work/life balance you deserve with an Ovenclean Franchise. Low cost, low overheads and earning potential of… t.co/3j4cVqXhMI