UK Van Business Franchises with Sole-Operator and Management Opportunities
All Franchise Categories  »  Property Services Franchises  »  Agency Express  »  Casestudies
Agency Express Case Study
Neil Chapman chose Agency Express as he was ready for a new challenge and a change of direction. Neil has built strong relationships with his clients and his second to none approach has safeguarded him a bright and busy future.

Neil Chapman became an Agency Express franchisee in November 2012. Previously a Hackney Proprietor based in Oldham, Neil was ready for a new challenge and a change of direction. 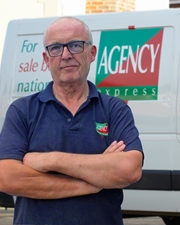 Being self-employed for many years Neil knew of the uncertainties that starting a new business could bring. This is why a franchise opportunity appealed to him, because of the high levels of support and the increased rates of success.

"I was looking for a new venture and whilst selling my house I wondered who put the signs up for the estate agents and was there a specialised industry that dealt with this?"

Neil attended The British Franchise Exhibition in Manchester where he approached the Agency Express franchise team looking for his ideal business. After much investigation and spending further time discussing the franchise with the Agency Express, Neil seized the opportunity of owning a van based business.

"I had attended various Franchise Exhibitions and after a bit of research decided that this might be a road I could go down. I did try another company first, but when I spoke to Agency Express and met the staff I knew that this was the company I wanted to join. I made my mind up there and then to do just that."

After successfully completing a comprehensive training course at Agency Express HQ Neil was given further support to assist in the launch of his new business. This included a 3-day programme of visits to estate agents in his territory, enabling him to make first contact with potential customers.

"The training process was a good experience. It steered me in the right direction but then I learned even more out on the streets. The time spent calling on estate agents with the training team was valuable. It gave me a good insight into dealing with the face to face part of the business as I am not a natural salesman. However, I found that SignMaster3 the Agency Express online board management system basically did the selling for me anyway. Even today it keeps me ahead of the game."

Less than a year from the inception of his business Neil had established a solid base of customers, he had quickly achieved growth and a sustainable level of income.

"There have been many highlights but I think signing up my first self-generated customer would be at the top. It gave me a great confidence boost and enabled me to feel that I could push the business on from there."

Today Neil continues to thrive in his territory. He has built strong relationships with his clients and his second to none approach has safeguarded him a bright and busy future.

A big factor was the relatively low start-up cost of the Agency Express franchise. However, the clincher for me was the people when I visited head office in Norwich. I felt a connection, everyone was very friendly and helpful but also professional. I thought to myself I could work with these people.Kevin Keeler, Agency Express Cheltenham and Gloucester