Steve Warren has run a successful Agency Express franchise since 2013. Previously employed as a courier driver Steve enjoyed his line of work but was attracted to the idea of being his own boss and to the benefits that it could bring. 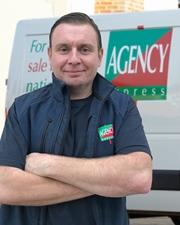 Coming from a career where driving and physical labour were part of his daily role, Steve decided that a van based franchise would be the perfect fit for him. After much investigation in to potential franchises Steve decided that the Agency Express opportunity was the best business for him to invest in.

"I heard about Agency Express though a friend whose father bought an Agency Express franchise in 2004. After speaking with him at great lengths I decided to make a further enquiry with Agency Express head office. From my first call to Agency Express, to getting the agreements everything ran smoothly which gave me the extra confidence to proceed."

As part of the Agency Express franchise package Steve attended Agency Express’ week long training and support programme. During this time, Steve exceeded expectations in all areas; departing Agency Express HQ on track and on target to accomplish his goal of running a successful franchise business.

"The Agency Express training programme has been vital to my success. Everything was covered from sales and marketing, laws and legislations, to learning how to calculate my VAT. Everything was made simple; I even went out for 3 days with an experienced board operator to get some hands on experience before having another 3 day assisted business launch."

Two years in and Steve’s business has gone from strength to strength. His professional but friendly approach has enabled him to build strong relationships with clients and his high standard of work has safeguarded him a bright and busy future.

"A typical day for me as a franchisee consists of leaving my house around 7am, getting all my jobs done by 2pm, then unloading the van and reloading for the following day. I’m usually finished and indoors by 3pm. I like having the flexibility to work the hours that suit my needs. Being able to start and finish when I like (within reason) helps my wife with the school runs and gives me more home time with my children. I now actually love the job I do; I get a buzz when I sign up a new client as it’s like a pay rise every time. I no longer live for the weekend but more so a Monday morning so I can get back out there and build up the business."

I was filled with confidence from the professional way my enquiries were dealt with by the Agency Express Team. The strength of the franchise package, the impressive growth of the business in the last 12 years and over 100 franchisees proves that the model clearly works.Martin Shuker, Agency Express Lancaster